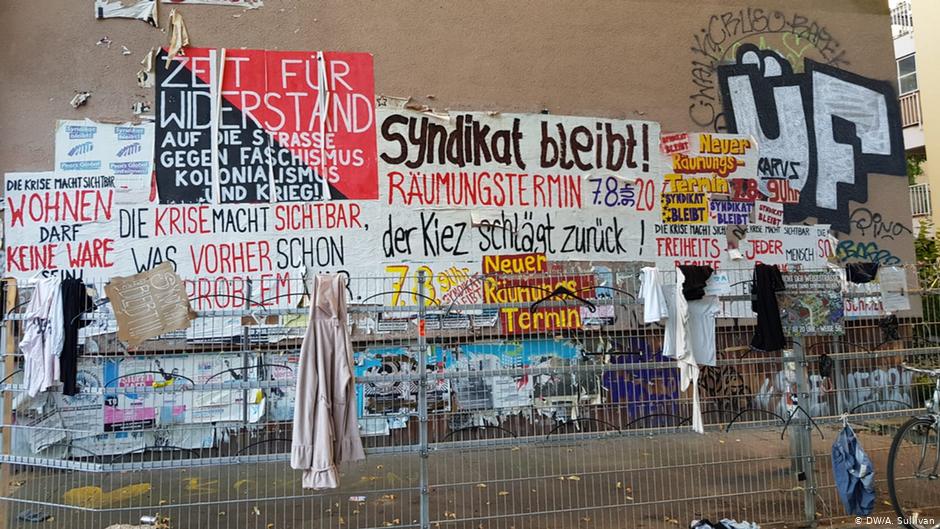 The long-time residents of Berlin bar Syndikat face eviction after an intense campaign of opposition. The story of the small bar and its billionaire owners shines a light on Berlin’s increasingly fraught property scene.

The people who run "Syndikat," a small bar in the southern district of Neukölln, found out the hard way. In September 2018, a letter arrived from a property management firm saying that the rental contract would not be renewed and that by the end of the year, the bar's tenants must hand back the keys.

Today (August 7, 2020), nearly two years since that first notice, the bar is to be finally cleared out and the tenants evicted. It's been quite a journey to this point.

Syndikat has been operating from the ground floor of "Weisestrasse 56" since 1985. It's a popular place. After 35 years, it has deep roots within the neighborhood. The collective that runs it has aligned itself over the years with various left-wing movements and causes.

When the eviction notice landed, Syndikat didn't know who their landlord was and it wasn't easy to find out. The letter from the property management firm mentioned it was acting on behalf of a group called Firman Properties, but finding out who they were took quite a bit of work.

But that still left Syndikat with the basic question unanswered: who is the landlord? Further digging established that Firman Properties and the others were owned by the William Pears Group, a multi-billion euro, privately run property company owned by three brothers, Mark, David and Trevor Pears. Based in London, the brothers are billionaires by virtue of their vast global property portfolio. A screenshot from the website of the William Pears Group, the multi-billion euro property company which owns the building in which Syndikat operates.

Even though practically no-one in Berlin had heard of the Pears brothers before Syndikat did their research, it turns out the company is a pretty important one in the daily life of the city. Through the various companies they control, they own more than 6,000 apartments in Berlin.

Using information from the Panama Papers data leak, journalists from Berlin newspaper Der Tagesspiegel and the investigative group Correctiv established that the Pears raked in $53 million (€44.75 million) in Berlin rents and sales in 2017 alone.

The Williams Pears Group has not responded to media questions about the situation with Syndikat. It did not respond to a DW request for comment, as it has not done for various other media organisations over the past two years. Its plans for the building at Weisestrasse are unknown.

After finally establishing who owned the building they were to be evicted from, the Syndikat collective began a campaign to stay. Its slogan "Syndikat Bleibt!" ("Syndikat Stays!") has become a common sight on the streets of Neukölln and other Berlin districts.

The campaign has received widespread media coverage. There have been dozens of protests against the eviction, including one on August 1, 2020 which turned violent after clashes between demonstrators and police.

The case of Syndikat became something of a frontline in Berlin's increasingly tense rent and property war.

Rents and property prices have been soaring in the German capital. In 2017, figures from property consultancy Knight Frank showed the city had the fastest-growing property prices in the world. Residents of Schillerkiez, the part of the Berlin district of Neukölln in which Syndikat is based, have shown strong support for the bar's campaign against eviction.

This dynamic property market has seen foreign investors plow capital into the city's housing market over the last decade. With tens of thousands of new residents arriving in Berlin annually, an existing shortage of affordable housing has been made worse.

With renters facing higher rents, eviction and a shortage of new places, big landlords such as the Pears brothers or Deutsche Wohnen have been targeted in protests over the rising price of property and what supporters of Syndikat's cause say is the rapid gentrification of the city.

There is considerable support for a referendum to take place on whether property can be expropriated from landlords that own more than 3,000 properties and turned into social housing stock. There is also considerable opposition from many quarters, including in the construction and property industries.

Political action has already taken place. Berlin has passed a five-year rent freeze law. Although challenged in court by the German government, which argues that regulating housing costs is a national issue rather than a matter for states such as Berlin, it recently had a significant legal win when the Berlin regional court said the law was in keeping with Germany's constitution.

While that law may ultimately reshape the property picture in Berlin, it appears to be too late for Syndikat's prospects of remaining on Weisestrasse.

The "Syndikat Bleibt!" campaign organised a protest called "The Long Night of Weissestrasse" for Thursday, August 6, with the hope being that the group and its many supporters would stage a mass demonstration through the night in front of the pub, ahead of the planned eviction by police and bailiffs on Friday morning.

However, the demonstration was blocked by the courts and the police built and manned an exclusion zone on Weissestrasse, limiting the capacity for blockades around the building. Demonstrations still took place on nearby streets throughout Thursday night and early on Friday morning.

However, by 9am on Friday bailiffs and police had already begun the eviction.

Syndikat's campaign to remain has been more prominent and vocal than most but there have been many similar stories around the city in recent years. There will likely be many more in the years to come, given the seemingly intractable conflict at the heart of the Berlin property market between investors and renters.