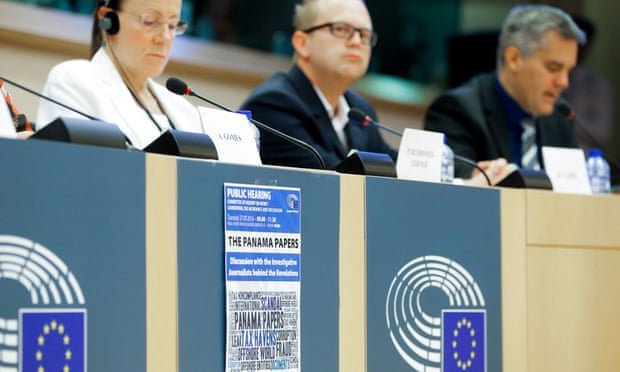 In first evidence session, 65-member panel hears from journalists involved in breaking the story of the Mossack Fonseca data leak

The role of UK tax havens in facilitating financial crime came under scrutiny as the European parliament opened its 10-month inquiry into the Panama Papers scandal.

At the inquiry’s first evidence session in Brussels, the 65-member panel heard from journalists at some of the media organisations that broke the story in April.

MEPs from a range of parties called for the inquiry to focus on the role of British overseas territories. Nearly half the 214,000 companies, trusts and foundations contained in the data leaked from the internal files of the offshore law firm Mossack Fonseca were registered in the British Virgin Islands.

Described by the whistleblower Edward Snowden as the biggest leak in the history of data journalism, the investigation by 107 media outlets in 76 countries revealed how offshore companies were being used to evade tax, shelter funds for criminals, facilitate political bribes and embezzlement, and avoid sanctions.

“I see a great risk with Britain leaving the European Union and thus becoming the biggest tax haven in the world,” said Green MEP Molly Scott Cato. “More than half the companies listed were registered in the British Virgin Islands and the data showed that other overseas territories and countries with a rather murky relationship with the City of London and the UK dominate the data. Britain is right at the heart of this.”

In a statement released after the hearing, the German MEP Michael Theurer, a member of the centrist Alliance of Liberals and Democrats for Europe, said he would be calling on British government representatives to give evidence. He said: “I recommend that we have a look at the influence of Great Britain on the former colonies and crown dependencies and the role that for instance the Cayman Islands, the British Virgin Islands, the Channel Islands, the Isle of Man or Gibraltar are playing.

“It would also be interesting to know if there could not be conditions attached to payments from London. For this I will suggest to invite the responsible representative of the British government.”

David Cameron, who was revealed to have invested in a Bahamas fund run by his father, which avoided UK corporate taxes for three decades, is among the witnesses MEPs from the leftwing alliance GUE (Group of the European United Left) are keen to summon.

George Osborne and his successor as chancellor of the exchequer, Philip Hammond, are also on lists being compiled by the various political groups on the inquiry.

Scott Cato said she would propose calling as a witness the home secretary, Amber Rudd, who was revealed in a new leak last week to have been a director of two offshore companies before she entered parliament. An initial roll call of witnesses is likely to be agreed on 12 October. The panel has no formal power to compel witnesses to attend, although it is unusual for those formally invited to refuse.

The Greek MEP Stelios Kouloglou urged greater protection for whistleblowers and for journalists working with the material they provide.

Snowden, who faces being put on trial for treason if he returns to the US, is living in exile in Russia. Two former employees of accounting firm PwC have been sentenced for leaking the details of corporate tax deals in Luxembourg, while the reporter at the centre of the LuxLeaks scandal, Edouard Perrin, was put on trial but acquitted.

“We have to protect and award people like Snowden,” said Kouloglou. “They opened the road for whistleblowing in the modern era.”

The individual behind the Panama Papers leak has chosen to remain anonymous, using the pseudonym John Doe. The journalist first contacted by John Doe, an investigative reporter at the German newspaper Süddeutsche Zeitung, addressed the parliament. Speaking via videolink from the United States, Bastian Obermayer called for an end to the offshore system.

“We have the hope that the European parliament will bring even more light into this world and help to end the secret parallel world in which the super rich and the powerful can avoid the taxes and any other law that seems inconvenient to them,” said Obermayer. “The rules on which we have all agreed have to apply to everybody, to the super rich 1% as well as for the rest, the 99%, otherwise our democracy is at stake.”

Over the coming months, MEPs will investigate whether national governments and the European commission failed to properly implement EU anti-tax avoidance and financial transparency rules.