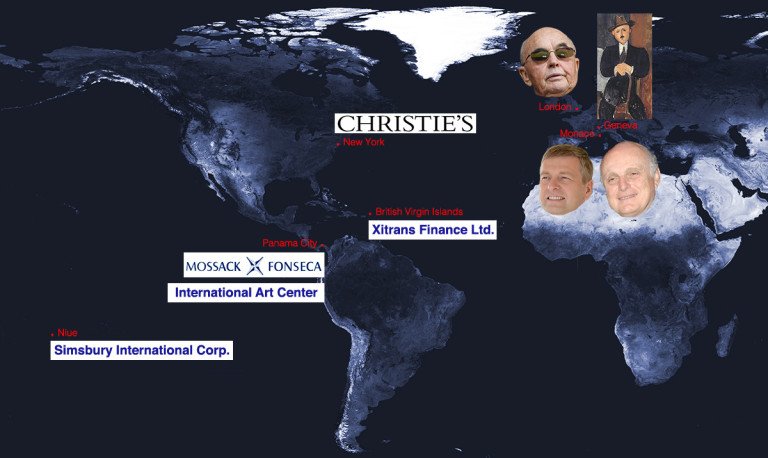 Earlier this month, a cache of 11.5 million documents tracking the wheelings and dealings of more than 210,000 shell companies set up by Panamanian corporate services provider Mossack Fonseca began to make waves around the world.

The so-called “Panama Papers” — which a mysterious source identified simply as “John Doe” began leaking to the German newspaper Süddeutsche Zeitung more than a year ago — have shed light on a secretive global network of wealth circulating undeclared and untaxed.

Armed with the Panama Papers, Süddeutsche Zeitung, the Washington, DC-based International Consortium of Investigative Journalists (ICIJ), and a consortium of other news organizations have published reports and articles offering a glimpse into a world of financial sleight of hand that many know exist, but to which few ever gain access. Unsurprisingly, much of the wealth at play in this shadow economy is bound up in art.

In the reports on the Panama Papers to date, art figures primarily as another asset class, ownership of which Mossack Fonseca frequently helped its clients conceal in order to avoid paying taxes, to keep it from soon-to-be-ex spouses, or to evade restitution claims.

While countless more stories about how art plays into the portfolios of the world’s wealthiest are sure to emerge in the coming days and weeks, three particularly high-profile cases have already helped draw the outline of the global system of concealment administered by Mossack Fonseca. David Nahmad and his relatives used the Panama-registered company company International Art Center — set up by Mossack Fonseca — to conceal their ownership of Amedeo Modigliani’s “Seated Man with a Cane” (1918), which was recently seized in a raid on Geneva Freeport.

Among the leaked Mossack Fonseca files was evidence related to a decades-old Nazi loot dispute over an Amedeo Modigliani painting. The 1918 painting, “Seated Man with a Cane,” was seized last week following a raid of the Geneva Freeport, where it was being kept in storage. Swiss judicial authorities stated that the Panama Papers investigation has led to the launch of a “criminal procedure.”

The work, worth $25 million, has been at the center of an argument between Philippe Maestracci — who claims that his grandfather, the Jewish art dealer Oscar Steittiner, had originally owned it before Nazis seized it — and the Nahmads — a family of billionaire art dealers and collectors, who exhibited the painting in 1998 at their Helly Nahmad Gallery in London and in 1999 at the Musée d’Art Moderne de la Ville de Paris. It was also featured in 2005 at the gallery’s New York space in a Modigliani exhibition.

As ICIJ’s Jake Bernstein reported, the family has denied possession of the work, arguing that it belonged to a Panama-based company called International Art Center, which had purchased the work at auction in 1996 — two years before its public display at Nahmad Gallery — for $3.2 million.

Its provenance was discovered by Mondex Corp., a Toronto-based firm that helps recover stolen or looted art. Mossack Fonseca’s records, however, indicate that Giuseppe Nahmad, the family’s patriarch who passed away in 2012, had himself registered International Art Center with the Panamanian law firm in 1995.

Another document showing minutes from a January 2014 meeting of International Art Center’s board of directors reveals that Monaco-based billionaire David Nahmad — one of two surviving brothers — that day became the sole owner of the company. Since its ownership was initially held in bearer shares, according to Bernstein, it had been impossible to figure out who controlled the company.

ICIJ brought the records confirming the Nahmads’ ownership of International Art Center to David Nahmad’s lawyer, Richard Golub, who simply responded, “whoever owns IAC is irrelevant. The main thing is what are the issues in the case, and can the plaintiff prove them?”

Nahmad himself denied the allegations, telling Radio Canada last week, “I would not be able to sleep at night if I knew I owned a stolen object. That brings bad luck. It’s an enormous crime. There is one thing that I believe wholeheartedly: don’t profit off the suffering of the victims of war.” Using Simsbury International Corp., a company set up by Mossack Fonseca on the small South Pacific island of Niue, London-based financier Joe Lewis acquired the Ganz collection and consigned it to Christie’s in New York.

Though they have exposed a great deal about how art is bought and traded today, one of the Panama Papers’ biggest revelations about the art market dates back nearly 20 years to a Christie’s auction that was, by many accounts, a harbinger of the subsequent ballooning of the market’s thirst for postwar and contemporary art.

On November 10, 1997, Christie’s held a single-owner sale of 58 works from the collection of Victor and Sally Ganz at its New York auction house. The costume jewelry magnate and his wife had spent $2 million amassing one of the world’s foremost collections of modern and contemporary art. Their holdings included the largest Pablo Picasso collection in the US, as well as many works by Eva Hesse, Jasper Johns, Robert Rauschenberg, and Frank Stella.

The Ganz auction brought in a whopping $206.5 million, making it, at the time, the biggest single-owner sale of all time (by more than $80 million). That night Picasso’s “Women of Algiers (Version O)” (1955) — which last year became the world’s most expensive painting sold at auction when it fetched $179.4 million, again at Christie’s — sold for $31.9 million.

Not the Ganz children, who, the Panama Papers revealed, sold their parents’ collection six months before the Christie’s auction to pay off inheritance taxes. Over 100 works from the Ganz collection were bought for $168 million by Simsbury International Corp., a company based on the small Pacific Island of Niue (population 1,190) and whose registered agent was Mossack Fonseca.

The person with power of attorney over Simsbury International was none other than currency trading billionaire Joe Lewis, who at the time was not only the richest man in England, but also Christie’s biggest shareholder.

A clause in one of the contracts specified that if the final bid prices for all the works sold at the Ganz auction exceeded the $168 million paid by Lewis’s company, Spink & Son and Simsbury International would split the difference. Though the sale’s final tally of $206.5 million includes the auction house’s commissions, it clearly surpassed the contract’s $168 million threshold, netting Lewis and Christie’s major returns on their gamble.

Using Mossack Fonseca to set up a company for the sole purpose of buying and consigning the Ganz collection allowed Christie’s to essentially offer the Ganz heirs a $168 million guarantee on the sale of their parents’ collection.

The details of the unprecedented arrangement, revealed in full by the Panama Papers, were opaquely hinted at in the catalogue for the Ganz sale, which noted: “Christie’s has a direct financial interest in all property in this sale.”

Since Mossack Fonseca helped broker a $168 million guarantee on behalf of Christie’s, auction houses offering sellers guarantees on high-profile lots and collections has become a common practice in the art market. By buying art through the British Virgin Islands-based shell company XItrans Finance Ltd., set up by Mossack Fonseca, Monaco-based Russian billionaire Dmitry Rybolovlev was able to keep his collection from his wife when they divorced.

It turns out offshore companies are also a means for the wealthy to tuck away their assets — million-dollar artworks included — when their marriages are falling apart. (Interestingly, in the majority of cases, it’s the husband who does the concealing.)

As ICIJ’s Will Fitzgibbon reported, Mossack Fonseca helped Monaco-based Russian billionaire Dmitry Rybolovlev register one company in the British Virgin Islands that he used to buy and store his collection, rendering it inaccessible to his wife. In 2008, Elena Rybolovleva filed for divorce in a Swiss court, setting in motion the most expensive divorce settlement in history.

Although Swiss law dictates that each party receives a neat, equal share of all assets, some of these were hard to track down, spread across Rybolovlev’s offshore companies.

One of these, Xitrans Finance Ltd., held the Rybolovlev collection, valued at $650 million. Established in 2002 — six years before the divorce filings — the offshore company was “no more than a post office box in sunny Tortola,” as Fitzgibbon describes, but “was a mini-Louvre museum when it came to its assets; Xitrans Finance Ltd owned paintings by Picasso, Modigliani, Van Gogh, Monet, Degas, and Rothko. It also bought Louis XVI style desks, tables, and drawers made by some of Paris’s grandest furniture makers.”

Documents from Mossack Fonseca show that Rybolovlev had used Xitrans Finance to transport goods from Switzerland to cities such as Singapore and London. According to Fitzgibbon, both Rybolovlevas declined to comment on the matter. The company is one of two the billionaire owns with ties to Mossack Fonseca.

Rybolovlev’s name has also been in the news for complaints he filed against another one of the Panamanian firm’s clients: Yves Bouvier, a Swiss art dealer known for using and renting out space in many freeports — storage facilities where valuable objects stay untaxed — around the world. Rybolovlev has accused Bouvier of marking up prices of artworks the former had purchased through the latter; the case will be taken up in Singapore, where Bouvier has residency status. Known as the “Freeport King,” he has at least five companies that have connections to Mossack Fonseca, as the firm’s records indicate.

A representative for Bouvier, according to Fitzgibbon, maintains that the Swiss businessman uses his offshore companies “for well-established legal purposes.”

Hyperallergic will continue to report on the latest Panama Papers revelations as they become available.