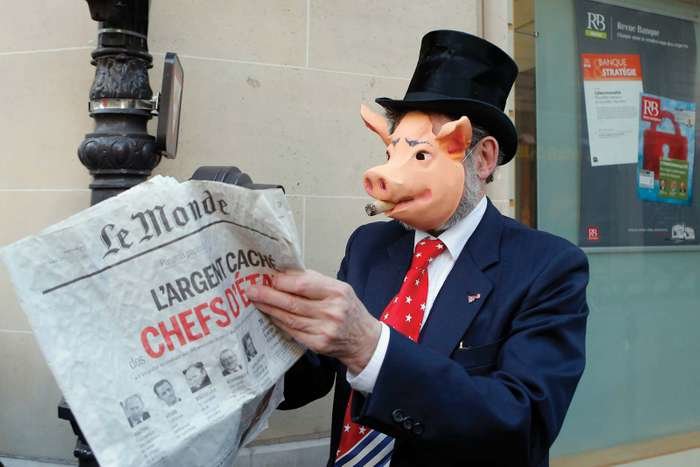 Panama Papers, documents from the database of the Panama-based law firm Mossack Fonseca that were made public in April 2016, representing one of the biggest leaks of confidential papers in history.

The massive trove revealed how the firm had assisted companies and individuals from more than 200 countries in secreting their money in offshore accounts, tax havens, and shell companies.

The collection disclosed how members of the worldwide superrich used tax havens to conceal their wealth, escape public scrutiny, and avoid paying taxes. In addition, the papers divulged the use of offshore accounts by suspected criminals to launder illicit earnings and by those who endeavoured to escape the impact of punitive sanctions.

The existence of tax havens was already well known, but the sheer scale of the revelations created an overnight sensation and caused widespread anger. According to Transparency International UK, the leaks demonstrated that “this is not a fundamentally benign system that has been eroded at the edges by a few criminals” but “a system with deeply-ingrained criminality that is now operated in the interests of the world’s corrupt elite.”

Mossack Fonseca was described as the world’s fourth largest provider of offshore services, with more than 30 offices worldwide, including in the British Virgin Islands, Switzerland, and China as well as Panama, which had previously been identified as a gray-listed jurisdiction for its alleged failure to prevent money laundering and terrorism financing.

Prior to the leaking of the Panama Papers, the firm had kept a low profile, and while questions had on occasion been raised about some of its clients, the firm had always strongly denied any wrongdoing.

In early 2015 the Panama Papers were leaked by an anonymous source to the Munich newspaper Süddeutsche Zeitung, which shared them with the International Consortium of Investigative Journalists (ICIJ), a U.S.-based global network. The ICIJ then shared the material with 107 media organizations in 80 countries, including such newspapers as France’s Le Monde and the United Kingdom’s The Guardian.

A communal database was created for the 11.5 million leaked documents (2.6 terabytes of data), which covered the period from 1977 (when the original firm was founded) to December 2015 and included e-mails, clients’ records, and information on bank accounts. For a year a team of some 370 journalists accessed and researched the collection, thus creating the biggest international investigative journalism project.

The matter was kept completely secret by all journalists until the agreed-upon date—April 3, 2016—when reports of the leaks’ existence were published for the first time. In May the ICIJ opened public access on its Web site to a database containing information on some 214,000 offshore companies worldwide.

Among those identified as Mossack Fonseca clients were celebrities such as show business figures, politicians, and other public figures; members of the international governing body of association football, FIFA; and companies that had at one time or another been sanctioned by the U.S. Department of the Treasury, including businesses linked to senior political figures in North Korea and Syria. Also named were sources suspected of having laundered funds obtained by criminal means, such as money from the 1983 Brink’s-Mat robbery—the largest gold heist in British history.

Immediate public attention was riveted on revelations regarding 12 current or former heads of state and others linked to political figures worldwide. Particularly notable was Icelandic Prime Minister Sigmundur Davið Gunnlaugsson, who was identified as having an undeclared interest in an offshore company.

That news sparked street protests in Iceland’s capital, and within days Gunnlaugsson resigned. Pakistani Prime Minister Nawaz Sharif was also forced out of office in April 2017 over corruption allegations that stemmed from the disclosure that his family had used shell companies to acquire expensive London properties.

The documents also revealed that the late father of British Prime Minister David Cameron had been a client of Mossack Fonseca and had kept much of his wealth overseas, thereby avoiding paying taxes for some 30 years. While that move may have been entirely legal, it proved embarrassing for Cameron, who in a 2015 speech had deplored the “corrupt, criminals, and money launderers” who take advantage of offshore companies. The documents also indicated that Ukrainian Pres. Petro Poroshenko had, on assuming office in 2014, passed ownership of his chocolate company to an offshore firm registered in the British Virgin Islands.

In addition, family members of Chinese Pres. Xi Jinping and of at least eight current or former members of China’s top ruling body were named in the leaked documents as having links to offshore firms. The Chinese authorities responded by ordering all Chinese news media to refrain from reporting on the matter and to remove any mention of the leaks from their Web sites.

The documents also divulged information about a suspected billion-dollar money-laundering ring involving close associates of Russian Pres. Vladimir Putin, though the documents made no mention of Putin by name. Putin’s press secretary—himself implicated in the papers through an offshore company owned by his wife—denounced the reports as a politically motivated plot to harm Putin and destabilize Russia.

Following publication of the leaks, Mossack Fonseca strongly denied any wrongdoing. The firm issued a statement saying that it had been operating for 40 years without reproach and “has never been accused or charged in connection with criminal wrongdoing.” The statement stressed that offshore companies were a worldwide phenomenon and that in many cases they were entirely legitimate.

The identity of the person or persons who leaked the documents remains unknown. However, in May 2016 an individual calling him- or herself John Doe published an 1,800-word statement explaining the reasoning behind the decision to release the documents. The writer said he or she was motivated by “massive, pervasive corruption” and the failure of governments worldwide to tackle the problem: “For fifty years, executive, legislative, and judicial branches around the globe have utterly failed to address the metastasizing tax havens spotting Earth’s surface.” As a result, “income inequality is one of the defining issues of our time.… The collective impact of these failures has been a complete erosion of ethical standards, ultimately leading to a novel system we still call Capitalism, but which is tantamount to economic slavery,” John Doe wrote.

In the wake of the revelations, investigations were launched by tax authorities in dozens of countries. Panama’s government announced the creation of an international advisory panel to improve the transparency of Panama’s offshore financial industry. At an anticorruption summit in London in May 2016, six countries—Afghanistan, France, Kenya, the Netherlands, Nigeria, and the United Kingdom—agreed to publish full registers of company owners in their territories.

In July the European Commission (the European Union’s executive body) laid out a set of guidelines aimed at preventing tax evaders from hiding money offshore. Apprehension that cleaning up the system would be a long and difficult task that would meet with strong opposition from those benefiting from its loopholes was supported in August 2016 when Nobel Prize-winning economist Joseph E. Stiglitz quit the panel that had been set up by the Panamanian government, saying that the government had refused to agree to the panel’s findings’ being made public.

Meanwhile, awareness that Mossack Fonseca represented at most 10 percent of the corporate service industry meant that the Panama Papers epitomized only the tip of an iceberg. That supposition was supported by a further leak in September 2016 of 1.3 million confidential documents, this time from The Bahamas. Those new leaks, which were added by the ICIJ to its database, pointed to the growth of another global trend—whistle-blowing. The latest accounts bore out the words of John Doe’s statement: “the next revolution will be digitized.”